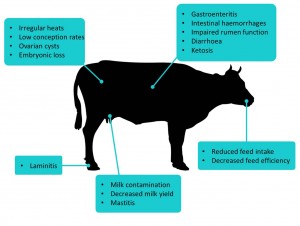 Bovine mycotoxicosis is caused by cattle ingesting mycotoxins which are in their feed. There are many clinical signs on mycotoxicosis, however they are non-specific.

The symptoms build gradually and include:

The severity of mycotoxicosis depends on the mycotoxin type, animal health, stage of production and dose eaten. Some types damage organs directly (e.g. liver, kidney and rumen), whilst others impair reproduction or cause cancer (Bryden, 2012).

Physical effects range from performance loss to mortality. Different mycotoxins can interact in the rumen to exacerbate the effect and some are known to suppress immune function (Fink-Gremmel, 2008). Signs of mycotoxicosis in ruminant animals include: loss of appetite, reduced milk yield or poor weight gain, feed refusal, diarrhoea, raised temperature, itchiness, bleeding and ill thrift (Krogh, 1978).

Early veterinary diagnosis of mycotoxicosis is difficult due to a lack of specific symptoms and overlapping symptoms of other metabolic diseases such as acidosis in cattle. Currently mycotoxicosis is generally characterized and diagnosed by the following features:

The problem does not end in animal disease or production losses as mycotoxins in the feed of dairy animals can lead to the presence of their metabolic products in dairy products (Riahi-Zanjani and Balali-Mood, 2013), which pose a risk in human health

A rapid early detection method of mycotoxicosis for ruminants is therefore required. Biomarkers which could be used for early mycotoxicosis diagnosis in ruminant livestock would significantly improve performance efficiency and reduce the risk of contaminated product.