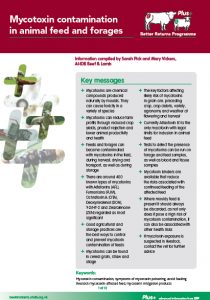 Mycotoxins are fungal metabolites that can be present on grain, cereals, grass, conserved forage and even dust. Several environmental risk factors increase the likelihood of mycotoxins and mycotoxicosis (disease in animals caused by mycotoxin ingestion), including high rainfall at crop flowering and during pre-harvest. Wet summers such as 2012 result in high mycotoxin levels in grain.

A 2014 survey of silage and animal health conducted on farms in south west England did not detect mycotoxin contamination in any of 51 grass silage samples analysed. However, mycotoxins were found in 90% of maize silage samples.

AHDB Beef and Lamb have produced a useful information sheet regarding the contamination of animal feed and forages with mycotoxins. The sheet contains useful information on what mycotoxins are, their occurrence, risk factors and assessing the level of risk. Click on the image on the right to access the sheet, or alternatively, click here.