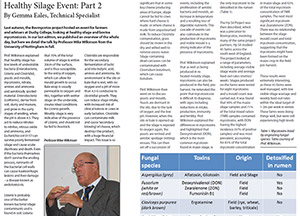 A second report on the Bovmycotox “Healthy Silage” event held at Duchy College last September has now been published in the Spring 2017 edition of the Rural Business School Newsletter. The article gave a detailed report on the presentation given by Professor Mike Wilkinson of the University of Nottingham. 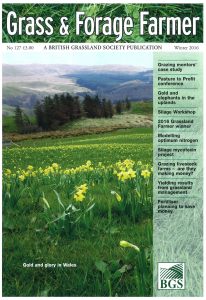 A report on the Bovmycotox “Healthy Silage” event has been featured in the “Grass & Forage Farmer”, the journal of the British Grassland Society.

Most moulds found on silage aren’t harmful and the rumination process has a certain ability to detoxify many. However, work being carried out by the Bovmycotox project, funded by BBSRC and led by the University of Bristol, is revealing how mycotoxin- producing moulds are responsible for causing chronic health problems and impacting on productivity in the UK herds.

The full article can be read here. 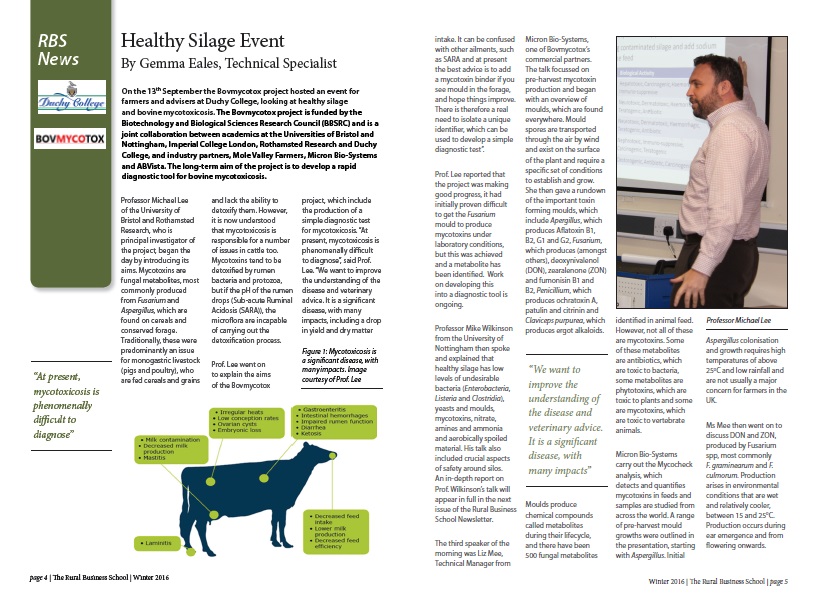 A detailed report on the Bovmycotox “Healthy Silage” event held at Duchy College in September has now been published in the Winter 2016 edition of the Rural Business School Newsletter. 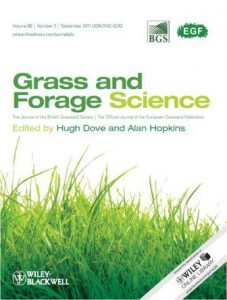 Implications of silage hygienic quality for animal production were investigated on forty-five dairy farms in South West England. Samples of grass and maize silages and of total mixed rations (TMR) were obtained together with information on silage technology, herd size and animal production. Samples were analysed for mycotoxins, bacteria, yeasts, moulds and chemical composition. Thirteen mycotoxins were assayed, but none were detected in the samples of grass silage. However, mycotoxins were found in 0·9 of all maize and other silage samples, with deoxynivalenol and zearalenone predominating. There was no relationship between total mycotoxin concentration and mean lactation milk yield per cow. Enterobacteria counts tended to be higher in maize silage than in grass silage and higher still in TMR – a cause for concern. There were no relationships between mould counts and mycotoxin concentrations in silages, implying that mycotoxins may have been produced in the field pre-ensiling.

The full paper can be accessed here. 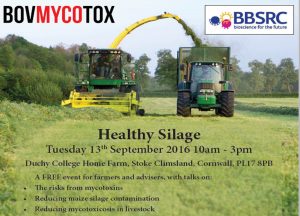 The first BovMycoTox project public event was held on 13th September, hosted by Duchy College. Despite a disappointing turnout, the event was a success, with presentations by members of the project team as well as an informative farm walk introducing the various trials being undertaken at the College. All of the event presentations can be viewed by clicking on the links below.

Breaking the mould! A new research project on mycotoxins 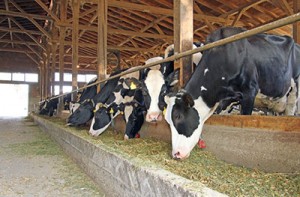 Not all of the moulds that grow on animal feeds are toxic, but those that produce mycotoxins are, and they can cause chronic health problems and reduced productivity in livestock.

However, the occurrence of mycotoxicosis in cattle can remain undetected due to a lack of specific symptoms and overlapping symptoms associated with other metabolic diseases such as acidosis.

To read more on this story, please click here.

Due to damp conditions over the harvesting period paired with low dry matter (DM) content, mycotoxin levels are expected to be high in forages this winter.

For the full story from Farming UK please click here. 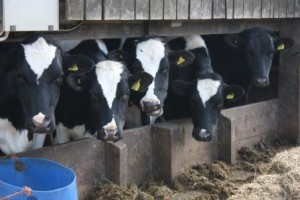 Mycotoxins, often one of the most neglected considerations in ruminant diets, should be a major animal health and welfare concern in modern animal husbandry, according to one leading researcher and veterinarian.

According to Fink-Gremmels, mycotoxins are currently the most prominent feed contaminants worldwide, attributing to a 25 percent decrease in genetic potential in dairy cows and an economic loss globally estimated at several billion annually. Natural toxins produced by diverse fungal species, mycotoxins are increasing in diversity through both pre- and post-harvest contamination.

To read more on this story posted by Smallholder, please click here.

Farmers need to test for mycotoxins and bacteria at the feed face of clamped forage to help avoid cattle health problems, a survey has shown.

The research was carried out collaboratively between Bristol Vet School, the University of Nottingham, Duchy College, Micron Bio-Systems, Mole Valley Farmers and AB Vista and was revealed at the Dairy Show at the Bath and West Showground in Somerset.